On Saturday 29 August 1908, over 100 years ago, 16 American battleships along with 5 various escorts entered Port Phillips Bay. Thousands flocked with excitement along the coast and to Port Melbourne to see the white painted ships and their sailors disembarked. 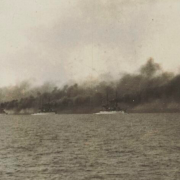 The American Navy Fleet, also known as the Great White Fleet – although it was leaving a dark smoke in the sky! – had left Hampton Heads, in the state of Virginia on the 16thof December 1907, for a world tour via South America, New Zealand before heading to Sydney then Melbourne.

The squadrons, manned by 14.000 sailors , enjoyed a warm welcome from the city until the 5thof September with parades, fireworks, public buildings illuminations, sports, and all sorts of entertainments and visits.

The Mission of course offered its services to the Federal Fleet Celebrations. Although not listed on the official program, the Mission extended hospitality to the ships chaplains, and seamen attended the three buildings in Williamstown (Sailors’ rest on Thompson St), Port Melbourne and the new Central Institute (Siddeley St) where they were entertained. 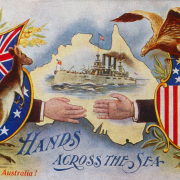 The Fleet’s Mission, ordered by President Theodore Roosevelt, was to make friendly courtesy visits to countries while obviously displaying new U.S. naval power.  Invited by Alfred Deakin to the young federation, who was feeling isolated and vulnerable after the Anglo-Japanese Alliance, the visit was a first step in the shaping of the relationship between the US and Australia. And also an impetus to create the Australian Navy in 1911.

Chaplains of the Mission – Rev James