A Little History about the Mission to Seafarers

The origin of the Mission to Seafarers rests with one man who saw a need and responded to it. 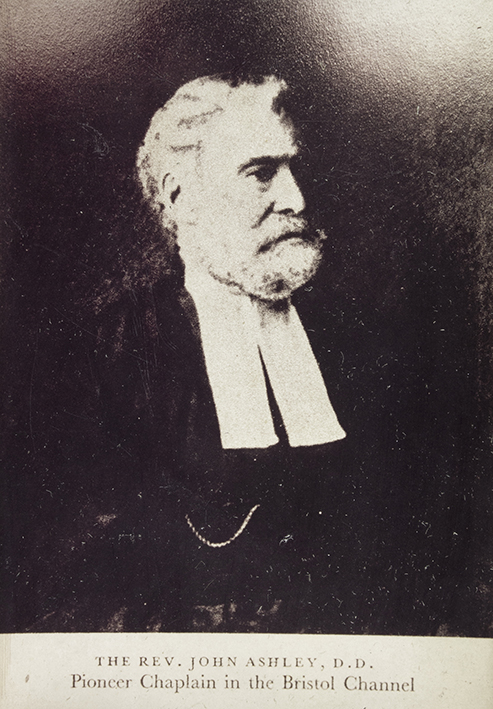 Pioneer Chaplain in the Bristol Channel

In 1835, whilst on holiday at Clevedon, Somerset, the Rev Dr John Ashley had occasion to visit the island of Steep Holm in the Bristol Channel during which time he became aware of the plight of seafarers. He was so moved by their harsh and dangerous conditions and lonely lives that he dedicated the next 15 years to their welfare until forced to give up his chaplaincy as a result of ill health. In 1857 the Victorian Seaman’s Mission was founded in Melbourne. In 1906/07 it merged with the organisation that is now known worldwide as the Mission to Seafarers.

The Victorian Mission was established on July 1, 1857 and began its work on an ex water police hulk called the Emily anchored in Hobsons Bay near Williamstown. The hulk was painted with the title “The Bethel Sailors’ Church” but was known as the Bethel Floating Church.

The Reverend Kerr Johnston was appointed chaplain and conducted two services each Sunday until 1859 when a boathouse was acquired at Port Melbourne that was in use until 1878. At this time a new building was erected and became known as “Bethel of the Victorian Seamen’s Union.”

The changing nature of shipping in Melbourne meant that by the mid-1890’s, there was a definite need to establish a new branch of the Mission in the central Melbourne area, as most ships at this stage were berthing along the Yarra River rather than at Port Melbourne.

A decade later, after much negotiation and under the impetus of the Reverend Alfred Gurney Goldsmith, a site was leased from the Melbourne Harbour Trust fronting Australia Wharf in Siddeley Street, near to an existing Sailor’s Rest. During 1905 the Victorian Mission to Seamen was created from the amalgamation of the London Seamen’s Mission and the Victorian Seamen’s Mission.

The Ladies Harbour Lights Guild was also formed in 1905 to assist the resident Chaplain in raising awareness and funds for the Mission, and were later responsible for raising money for both the Memorial Chapel of St Peter the Mariner and the domed Norla Gymnasium. The Guild was well patronised by prominent members of Melbourne society and grew to be a substantial organisation.

In 1917 the Mission moved to its current location a short distance away, as the Melbourne Harbour Trust required the use of the Siddeley Street site. The Mission to Seafarers Victoria is now approaching the centenary at its current location at 717 Flinders street, and is listed on the Victorian Heritage Registry for its outstanding architectural, aesthetic, social and historic significance to the State of Victoria. For further details please visit the Victorian Heritage Registry 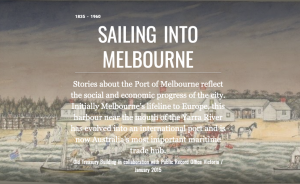 This online exhibition created by PROV on Google Arts and Culture is based on the physical exhibition of the same name originally displayed at the Old Treasury Building in 2015.

The stories show the important role of the bay and the river in the history of Melbourne. A maritime past still overlooked. 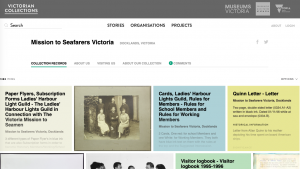 You can research the rich Mission’s heritage on Victorian Collections. Our team is always looking for volunteers to help us catalogue, digitise the thousands of documents and photographs. Contact the mission if you think you can assist us.

The story of the Merchant Navy and the Ladies of the Harbour Lights Guild of Melbourne during WWI.

The film outlines the value of the Merchant Mariners and the women that supported their contribution at a peak period of conflict for the emerging nation. As an island nation, the shipping industry is just as important today as it was in the early 1900’s.

unding for the film was made possible by the The Victoria Remembers Major Grant Program supported by the Victorian Government and the Victorian Veterans Council.

Up to and beyond World War I, in Victoria a network of women supported seafarers in danger through their pioneering efforts for the Mission to Seafarers.

The documentary ‘Harbour Lights’ tells the story of Melbourne’s iconic Mission to Seafarers building, its connection to the Great War and to a unique community of ships crews and volunteers.

The Melbourne Mission to Seafarers was constructed on the Yarra River waterfront in 1917 during the First World War at a time when ships carrying goods and cargo were subjected to risk and crisis at sea.

Funded by the work of a little-known group of women called the Ladies Harbour Lights Guild, the Mission supported the global welfare of seafarers from ship to shore, an endeavour which continues today in Australia and around the world.

The seventeen-minute film tells the story of this remarkable group of women and the lives of seafarers in early 20th century Melbourne.

Featuring Melbourne historians, commentators, archivists and architects and rare footage and images of sailing and social life in and around the ports of Melbourne, this film will inform and connect audiences young and old.

This Wind & Sky Production was produced in collaboration with the team at Mission to Seafarers Victoria. It was directed by Jary Nemo and written and produced by Lucinda Horrocks and Jary Nemo with executive producers Sue Dight and Gordon MacMillan.

Created with the support of the Victorian Government.

The MtSV founded its Heritage Collection within the building complex in 2010. The collection is assessed by Context Pty Ltd as being of National and State Significance.

In 2015 the focus of the program has been to preserve, catalogue and digitize the collection of some 10,000 items and objects. In 2015 a part-time Collections Manager Position was appointed and supported by an Intern Program and volunteers the Heritage Collection has raised new awareness and funding opportunities for the work of the MtSV again this year.

The development of the Collection’s Policies and Procedures, and progression through the Museum’s Australia Accreditation Program has sought external consultancy to achieve stages of the accreditation. In 2015 the MtSV has received funding from Bendigo Wealth, part of the Bendigo and Adelaide Banking Group and grants through Helen Macpherson Smith Trust, Public Records Office of Victoria and National Library with in-kind support from City of Melbourne. A Heritage Collection Preservation Needs Assessment was conducted by The Centre for Cultural Materials Conservation, the University of Melbourne in May 2015.

The Mission has been continuously working in Melbourne since 1857 and has retained a substantial amount of records that document its charitable work dating back to this time, which are currently held in the MtSV archival facilities at the Flinders Street Mission. The curatorial team is in the process of digitising and cataloguing its collection that consists of approximately 10,000 photographs, documents and objects of great social, spiritual and historic significance. The collection includes material such as marriage and baptismal certificates, shipping records and newspaper clippings that are of great interest to the general public.

Many photos are over 80 years old, and several of the scrapbooks document historically significant events, such as the death of Queen Victoria. MtSV also has a collection of love letters sent to a young woman of the Harbour Lights Guild, as well as letters sent to and from the Mission from various people and organisations throughout its history.

Once our digitisation project is complete the public will be able to access the entire Mission to Seafarers Victoria’s collection online – there are already several hundred records and images available for viewing on the online catalogue. Although this is the first time in the 153 year history of the Mission that an archive has been created, it is our hope that we are laying the ground work that will preserve this material and future items for centuries to come.

The archive will continue to be added to with photographs, documents and objects from today and tomorrow, which will in turn be catalogued and preserved for future generations. 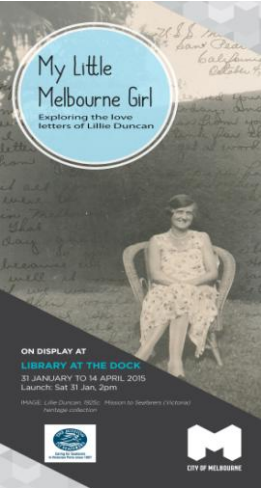 Produced in 2015, My Little Melbourne Girl exhibition invites the audience into hearts of numerous seafarers whose adoration for Lillie Duncan, a Lady of the Harbour Lights Guild, circa 1920’s, is expressed in their letters to her as revealed in the MtSV’s Heritage Collection and Archive. Reminiscent of an era when seafarers had time to ‘woo’ a lady, take a ride at Luna Park and when whisked back to sea, kept in touch with letters written. The exhibition shares a snapshot of Melbourne’s social history during a time when the Mission to Seafarers was supported by the prominent fundraising activities of the Harbour Lights Guild. The exhibition was officially launched in January at Docklands, Library at The Dock.