Made in Sheffield, England in 1908, the trowel travelled across the world multiple times over the hundred-plus years between laying the stones and being returned back to the mission earlier this year.

Professor Uma Kothari presented the trowel back to the mission last month at the opening of her photographic exhibition on the Mission to Seafarers: Encountering People, Places and Things.

“On the 14th of November 1916, two foundation stones were laid at the front of the building on Flinders St – one for the chapel and one for the main building,” she said.

“One has the name of Sir Arthur Stanley on it, the Governor of Melbourne at the time, and the chapel foundation stone has Margaret Stanley, who was his wife, engraved on it.” 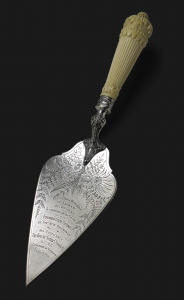 Professor Kothari said Sir Arthur Stanley was actually unwell on that day in November 1916 and so Margaret Stanley presided over both. In 1919, the couple and their five children returned to England with the trowel.

Sir Arthur Stanley died in 1931. His youngest child Victoria, the only one of the children born in Melbourne, became a famous opera singer and married the Canadian lieutenant colonel JD Woods.

They emigrated back to Canada after the Second World War. Victoria died in 2007 and JD in 2008.

Professor Kothari said the story then moved abruptly to a man named Israel Neiman, who was a Polish Jewish Holocaust survivor. He also ended up in Canada after the war, in the same city as Victoria and JD – Toronto.

He was a tailor renting out rooms in his house for extra money. When he died in 2006, granddaughter Gilian Ross cleared out his house into a skip. Her husband Kenny, whose family had a history of seafaring, found the trowel and decided to keep it.

“Kenny and Gilian Ross carried on living in Toronto until 2010 when they emigrated back to England where Kenny was originally from,” Professor Kothari said.

“The trowel was in a cabinet in their house until November 2018, when Kenny found the Mission to Seafarers Victoria on Facebook.”

“He messaged the page and said, ‘I think I have something that belongs to you’.”

The trowel was too precious to send in the mail, so MtS asked Professor Kothari if she would be the Mission’s representative and pick it up during her next visit back to her home university in the UK.

“I brought it back in my luggage.”

So, the trowel went from England in 1908, to Melbourne, to England, to Canada, to England, and is now back in Australia.

Professor Kothari said the missing link in the story was how the trowel went from Victoria and JD Wood’s possession to Israel Neiman’s house. It’s a gap she is still trying to fill in.

Stories of the Mission – The Great White Fleet

Heritage Tours are back!
Scroll to top