History, ideally, would present as a continuous story but there are many participants in the evolution of an organisation and building. Hundreds of different contributors are involved over a Century. Changes in perspectives, documents, publications and images and many facts may well be lost in time and memory.  This fascinating story from the late 1890s has emerged over the years and has primarily been pieced together by Ros Fletcher, one of our heritage volunteers.

There is no doubt that Chaplain James with his fascinating background of blacksmithing, gold mining shareholder, member of the Wesleyan community and twice a jury foreman is a colourful and was an influential figure in the history of the Mission, setting up many service models that still influence the contemporary service offered today to seafarers.

It all began with the faded photo of a headstone engraved with an impressive tribute (see image).  Found by Jay Miller, the Heritage archivist as she 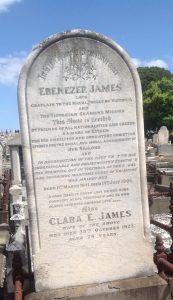 familiarised herself with the MTSV Collection no-one really knew very much about what seemed to be a mystery Chaplain. Some initial leads were followed up with Historical Societies and HMS Cerberus and a few more facts emerged. The reputation of Chaplain James needed an image, and it was  a reference in a scrap book page from 1901 to a memorial unveiling hinted at the existence of an image. The hunt was on!   Ros Fletcher, and husband Ian, also a Flying Angel volunteer driver, firstly confirmed the 1901 headstone existed, and was indeed found by them basically intact in the Melbourne General Cemetery, Carlton.

Ros took up the search for the man by extensively researching the James family, from their origins in Cornwall through to their arrival and establishment in Ballarat. Using her expertise in online genealogical research she spent many hours fleshing out the story of the increasingly significant figure of Ebenezer James and his role at the Mission.

The  appointment of Mr James  in 1886 as temporary Chaplain, was found documented in a minute book. This initial role led in due course to a total of fifteen years of service with the Mission to Seamen until his sudden death in 1901.

Building on the foundational and inspirational work of the Reverend  Kerr -Johnson and his wife, who founded the original Bethel building James or Eb as he was known locally, worked at the Port Melbourne Institute in Beach Road. By the mid 1890s this building had evolved from a wooden building to a ‘..handsome and commodious structure’.  This “..gentleman with a fine presence “ sought to further the aims of the Mission,  and in its best tradition to actively improve both the physical and spiritual lot of the seafarer; be they trainees, leading hands, mates or masters, Chaplain James conscientiously worked for the betterment of all and actively strove to change the more common perceptions of sailors, popularly described as either “slaves or drunken brutes”. 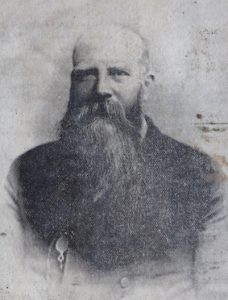 Ebenezer James seems to have had the knack of not only inspiring the support of significant figures of rank in the Community but also the energy to pursue the perpetrators of the “nefarious business of crimping”. The collusion of boarding- masters, shipping companies and other interested parties resulted in sailors being either shanghaied and  or being abandoned or dismissed at the end of voyages, marooned  with few resources in a strange country.

Port Melbourne was notorious amongst mariners in the 1880s for this practice. James, at some great personal risk took up the challenge against the crimpers and their interests confronting the perpetrators on board the ship, exposing them to the unwitting sailors and with the help of authorities such as Customs Commissioners and foreign consuls succeeded in stamping out the practise of Crimping.

Chaplain James was not only up against the Crimpers he faced another challenge.  A sailors perception of the religious. The “Holy Joes, Sky Pilots, Ranters” , were all  derogatory terms used by seafarers to describe some clergymen in seaports,  often  found to be colluding with ship captains or the boarding-masters, “ seeking  to exploit and profit from the humble  Jack*” .

Fortunately the efforts of the “… tall commanding figure with clear honest eyes..” was in the end appreciated, and described  in one  mariner’s comment  as being of “…the right stuff…no mere ranter!”.  It was perhaps due to these efforts and personal qualities that James also came to be appointed as Honorary Chaplain to the Naval Forces in Victoria until Federation in 1900 saw the formation of a national maritime force.

Contemporary news clippings and various published profiles make it clear that James also understood that in addition to enduring  the physical rigors of wrangling, rigging and the demands of sailing in early steam ships, seafarers had a need not only for:  spiritual comfort, consolation and sustenance but also interesting activities and entertainment. With help of talented family and friends catering to these needs helped minimise the attractions of other temptations such as drink and gambling. Both professional and amateur concerts were available twice weekly . There were also packages of picture news, magazines and journals made available to be carried by sailors on the next voyage, to share with fellow crew.

At the end of his life, with the material and moral support  of both notable Melbournites and devoted volunteers Mr James by the late 1890s had an Institute free of debt and  “…described by mariners around the globe as the best in the world – a real good concern” Weekly Times Melbourne 21 September 1895

On Wednesday 16th of November 2016 diligent research made the big breakthrough! The elusive image of Ebenezer James was discovered by Ros Fletcher, in a clipping of an article pasted on a loose page from a scrapbook, the man himself revealed. Great was our joy !  A high res Photographic portrait has now been produced and added to our Collection records. 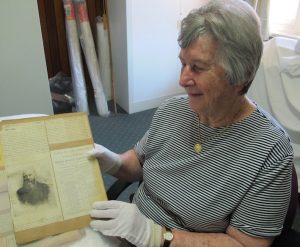 Thanks are also due to those who assisted in the very early stages of the research namely Elisabeth Moglia, Jenny Porteous and Ian Fletcher. Jay and Ros are now looking to present  a look at the life and times either for exhibition or online looking at Ebenezer James and the Captains and ship’s masters who petitioned for a Central institute in our present location in the 1890s.

Much of the research has been drawn from a key 19th Century  scrapbook in the collection, possibly maintained by the James family with glued clippings, a number of these are either undated or origin unclear. Other sources have included event posters, newspapers, registers, annual reports and minute books in the MTSV Collection. Some newspapers and publications were accessed via Trove and where known some sources are listed below.

A newcomer to the History and ongoing story of the Mission, Jay Miller, librarian then Museum worker for some 35 years, commenced part time work at MTSV in 2016. Sorting through the vast array of records and documents, from the last 150 years it was clear that although much material has been sorted  and already shared in some excellent exhibition of recent years, there is many stories to discover.

Chaplains of the Mission – Rev. Wong

Stories of the Mission – The Great White Fleet
Scroll to top