For their safe and efficient operations, ships depend on seafarers working far from their home and family for months, sometimes years – often in harsh and dangerous conditions.

As an island Nation, Australia relies on seafarers. The work of the Mission to Seafarers is a way of acknowledging their work and hardships, by provision of support.

All seafarers and port workers are the unsung and unknown front line key workers for the movement of essential cargo to keep all countries’ wealth and health stay afloat during this extraordinary time. They continue to bring in important medical supplies and other essential items to countries in desperate need of them, but are never regarded as citizens of the world or considered equally as important as their cargoes. They are constantly sent to danger zones and endure fear, danger and uncertainties of being stuck on seas and ports.

They are confined to their ships to “relax” even when they come to a presumably safe zone as they are feared to have come from dangerous countries. Ships are one of the safest places at this time, due to them having to endure being stuck on board as they travel the distances of the oceans across our globe. They are not being able to go home to their families, who in this time of need due to restrictions of no or few crew changes at this time. They are ‘imprisoned’ on their ships due to restrictions of not being able to go ashore. The Mission’s work is to care for all crews at this time – as we have been since 1857 in the Port of Melbourne and from Flinders st since 1917.

The Mission to Seafarers want you to know we salute you and are always thinking about you. As a member of an International Organization with links to other global organizations, please do not hesitate to contact us through: our websites, social media or via the phone if you can … anytime, anywhere. if you need assistance and moral support we are here for you 24/7 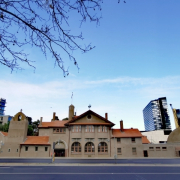 FOR SEAFARERS
What to do
How we can help
Things to do
Welcome to Melbourne
WHAT’S ON AT THE MISSION
Exhibitions, Events, Displays

About the Art Prize
View the 2021 Gallery

SHIP TO SHORE NEWS
All our latest news from our neighbourhood and afar
THE MISSION BUILDING
The Heritage, the Venues, the Activities, the Chapel, the Gardens, the Gallery

DONATE TO THE MISSION

GIVE A MONTHLY DONATION
MAKE A ONE OFF DONATION

HERITAGE
Our History
Our Heritage
Our Stories
ALL ABOUT THE MISSION
What we do, Crew 717,
Employment/Volunteers,
Who we are, Our Board,
Our Mission, Our Supporters
Scroll to top