Mission to Seafarers Victoria is delighted to present the Early Origins Exhibition –  a wonderful collection featuring historical items previously unseen by the public. Discovered ten years ago in the bowels of the site’s Flying Angel Club and painstakingly put together by dedicated historians; Early Origins is a collection of newly-discovered stories of Melbourne’s maritime history.

Early Origins exhibition is a permanent collection of historical artefacts, photography and documents that uncover the untold tales of the early days of the Mission to Seafarers and the Port of Melbourne.

The exhibition has come at a significant time for the Mission which in 2017 celebrates 160 years of operation in Melbourne – and 100 years at it’s present Flinders St location –  responding to the unique circumstances of those who live and work at sea.

The exhibition spans the entire operational areas of Mission to Seafarers site, encouraging visitors to explore the premises for themselves; discovering historical gems room-to-room, guided by wayfinding signage. The exhibition features heritage interpretation panels and a number of display cases containing historical artefacts stretching beyond the Mission’s 100 years of operation at it’s now heritage listed building complex at 717 Flinders Street, purpose built for seafarers in 1917. Further to its significance of capturing Melbourne’s maritime history, Early Origins represents the largest and most complete collection of material relating to seafarers’ welfare in Australia, as well as largest and most complete collection of material relating to the international organisation The Mission to Seafarers in the country.

The exhibition is the culmination of years of hard work from dedicated volunteers and provides unexpected insights into the depths of Melbourne’s maritime past.

“We discovered the items by pure coincidence and when we started cataloguing them we were captivated by the stories they told about the people who came here. Not just the seamen who were welcomed from across the world, but also the hundreds of volunteers from all walks of life across Victoria”  –  CEO.

Early Origins pays homage to the Mission’s valued volunteer organisations, in particular the Melbourne chapter of the Ladies Harbour Lights Guild, and will be the largest and most complete collection of Ladies Harbour Lights Guild material in Australia. The Guild played a very significant role in the establishment and operation of the current site, having funded most of the construction of the original building in 1916 and continued to service the Mission for over 50 years.

Early Origins also delves into the foundations, design and construction of the Mission. The heritage-listed complex itself was originally designed in 1913 by esteemed architect Walter Richmond Butler, and is a merging of Arts and Crafts and Spanish Mission Revival architectural styles.

Early Origins is the first of a number of significant events marking the Mission’s 160th year and the centenary of the current Flinders St site. 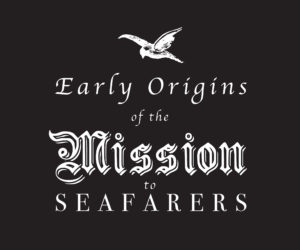