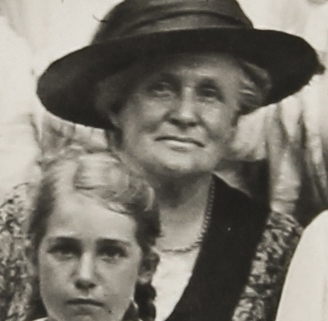 by G. Brault and J. Miller

One of the many goals of the heritage team at the Mission to Seafarers Victoria (MtSV) has been to re-discover and share some of the stories and backgrounds of people recorded in our historic archive.

The Memorial chapel of St Peter is a ‘treasure house’ of memorials.  In 2017 with not only our Mission centenary, but also the Centenary of the 1914-18 Great War a focus, we began to explore how the women of the Mission responded to the challenges of that time.

One woman who worked devotedly for some twenty-five years to support the Mission and seafarers was Miss Ethel A. GODFREY, Honorary General secretary of the Ladies Harbour Lights Network 1906-1930. We wanted to know more about how she was able to tap into such a wide social network to assist her impressive efforts as a leader and try to get a sense of her as a person before the Mission dominated her life.  As we gradually pieced together research gleaned from a variety of sources,  an intriguing and independent woman emerged. 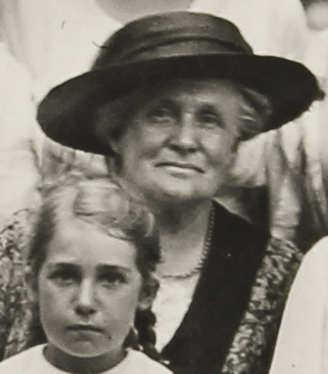 On the 8th of November, 1861 just 6 days out from Port Philip, aboard the passenger ship, Copenhagen, Ethel Augusta, was born to parents Margaret Lilias (nee CHAMBERS) and Frederic Race GODFREY*, a significant settler and pioneer family.

In retrospect the sea and ships would help shape the life of their new daughter and her death in 1935 would be marked with a substantial stained-glass window in the Memorial chapel at 717 Flinders Street, Melbourne.

The heritage team were able to glean much about the mature, confident Miss GODFREY, through the MtSV documentary archive, our primary source, which included annual reports and minutes, dated from 1906 onwards. It was easy to assume that a single woman who grew up in the 19th century prior to 1900 had perhaps led a somewhat restricted and limited life. So where did she gain her confidence? Ethel GODFREY was 45 years of age when she was “recruited” by Reverend Alfred Gurney-Goldsmith at the home of her parents, Graylings in St Kilda. 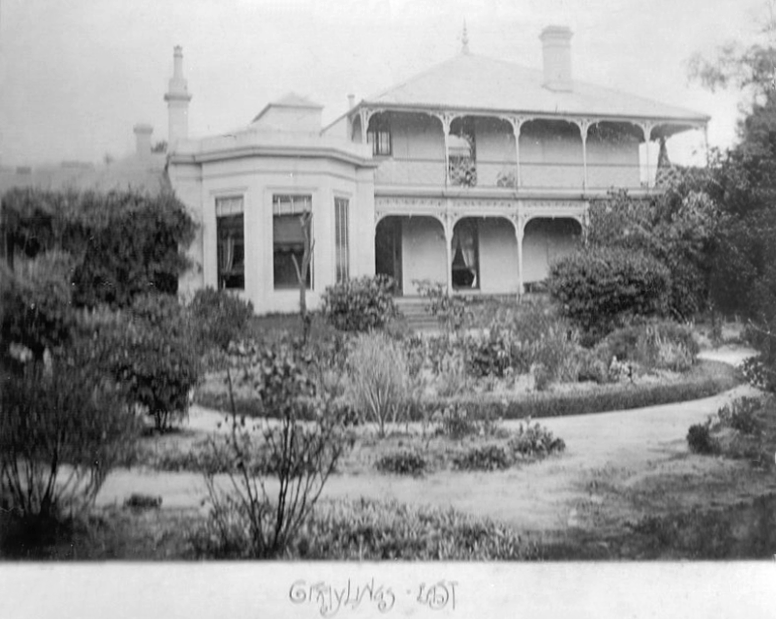 The GODFREY family were highly respected and well connected. Mr GODFREY was appointed as a lay canon in 1869 and also served three terms in the Legislative Assembly as an independent member for E. Bourke, 1874 to 1877. He was active in philanthropic circles and the family followed a strong commitment to improving the lives of those less well off. Her father was a member of many philanthropic boards including the Melbourne hospital committee and supported the efforts of Albert Le SOUEF to preserve Wilson’s Promontory.

Ethel and her sisters made the most of their education at Fairelieght the elite girls’ school, on Alma Rd. St Kilda, established by the Misses CHAMBERS in 1874. This was undoubtedly where many connections and friendships were forged. The four GODFREY sisters of debutant age were accustomed to mixing in polite circles in Melbourne, regularly attending fetes, balls, tea parties and “at homes” at many of the substantial houses of families such as the CLARKEs, the SARGOODs, the ARMYTAGE and FRASERs.

The GODFREY sisters were also talented and contributed in many ways to the community; interestingly only their father, mother and one married sister are recognised in the National archive. The family also made regular visits to England and Europe to visit their brother who studied at Edinburgh. Ethel lived at the family home until the death of their father in 1910. 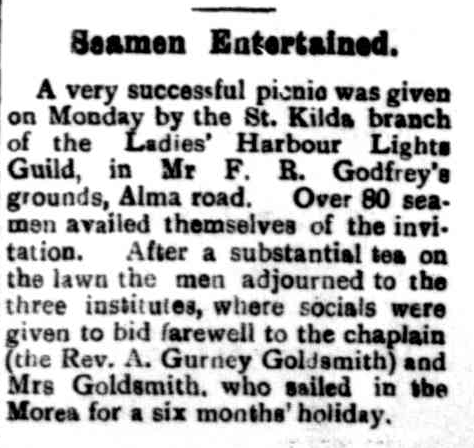 As we filled out the profile and persona of Miss GODFREY we called on many sources, such as Trove; social pages and news reports were invaluable. We found she was a person of note to her contemporaries, a performer at both private and public events. A passion for music and singing had led to studies in Europe: in Brussels with a certain Monsieur Edouard BAUWENS, a teacher of singing at the Royal Conservatorium of Brussels, in England with gifted Austrian soprano Marie FILLUNGER (a pupil of Mathilde MARCHESI who also trained Nellie MELBA) and Danish soprano Anna STEINHAUER who lived for a few years in Australia. In 1896 Albert MALLINSON, an English composer wrote the song Maude Clare especially for Ethel.

It was perhaps a practical streak that also led Miss GODFREY to become an articled law clerk in 1895. It was to stand her in good stead in her future roles not only for the Mission but also the Ladies Work Association and for the Victorian branch of the Ellis Rowan Memorial committee charged with raising funds for a memorial portrait of the artist.

Ethel GODFREY performed at the Twentieth Century Fete of 1901 held at Como by the ARMYTAGE family. From 1903-1904 she performed a series of concerts with her friend and pianist Alice SPOWERS, or was accompanied by her younger sister Frederica, on the harp.

Our assistant curator also contacted a branch of the GODFREY family, who generously shared with us some interesting family photographs and trees. This connection also made us aware of the many different branches of the GODFREY families helping us avoid the all too familiar false trails.

In wartime, by then Honorary secretary of the Ladies Harbour Lights Guild, Ethel GODFREY brought not only her many talents and organising skills to bear but also actively supported and liaised with the French Red Cross in Melbourne and Madame CRIVELLI its founder. This link undoubtedly inspired the production of 6000 pocket sized English-French phrase booklets sold to raise funds for the Mission and the FRC. A copy of this booklet was recently found in the Monash University rare book collection. After a brief visit to England in 1914-15 Ethel also shared her family experience of war, surviving the bombing of Scarborough. On her return to Melbourne she conveyed first hand impressions of the impact of the war on the British community noting the many young widows on London streets. Merchant seafarers, carrying troops and supplies had also been severely impacted in the early period of the war, at the mercy of submarines and mines.

Thanks to the efforts of some six hundred members of the Ladies Harbour Lights Guild across Victoria the Mission managed to function through the social upheavals of the war years, still raising substantial funds to help build a new Mission and memorial chapel to merchant seafarers. The new Mission complex finally opened in the spring of 1917.

One of her most loyal aides was Alice Sibthorpe TRACY, the LHLG Honorary Treasurer (1907-1923). Alice was the daughter of Dr. TRACY who specialised in Obstetrics, the first specialist to lecture in this subject at the University of Melbourne.

Always an independent woman herself, there is no evidence that Ethel GODFREY ever aligned herself with the suffrage movement. The Mission did however become a major cause in life, and Miss GODFREY emerges undaunted in the post-war period. Thanks to her own travels across oceans and along coasts to Missions in other ports, Miss GODFREY brought to her role a compassionate and acute awareness of the realities facing merchant seafarers. Unlike many ladies who would not venture to the ‘wilds’ of the central docks on the Yarra, Ethel and her core group of volunteers did so. They worked onsite with a sincere wish to provide comfort and spiritual wellbeing to seafarers of all classes. Our digital images clearly show the ladies of the Mission at picnics and outings in the grounds of many Melbourne and suburban mansions. 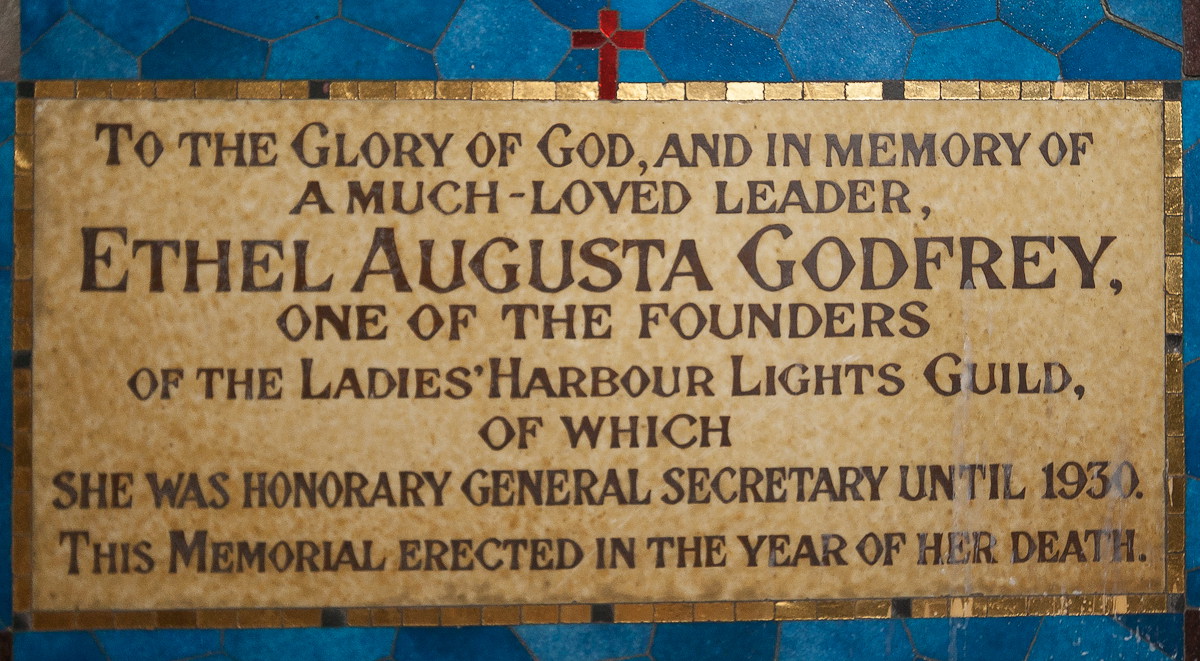 The commemorative windows of 1936, confirm the status and respect for Ethel GODFREY and her colleagues gained through working tirelessly on behalf of Seafarers. The windows were conserved in 2019 and once our renovations are complete can be viewed by general visitors. (re-opening circa mid-2020)

Coda: The award of a grant under the Victoria Remembers scheme in late 2018 resulted in a short documentary film.  Harbour Lights produced by Wind & Sky and the MtSV was launched by the Minister for Veterans, the Hon. Robin SCOTT, in February 2020.

The film is designed to introduce future generations to: the central city dock area of the Yarra at the outbreak of war in 1914; the challenges of seafarers; the remarkable memorial chapel, and the Ladies Harbour Lights Guild which continued to operate at the Mission until the 1960s. The film can now be viewed at the following link  https://youtu.be/RDU9xvImxns

So many of the single women listed in the Harbour Lights Guild are difficult to identify once they acquired married names and yet we are sure that many continued their connection with the Mission.  If you know of any ancestors who were members of the State-wide LHLG network we would love to hear about them. Photographs are especially useful to compare with our digital archive of group photographs at the mission and on outings.

MTSV Chaplains of the Mission – Rev. Wong
Scroll to top