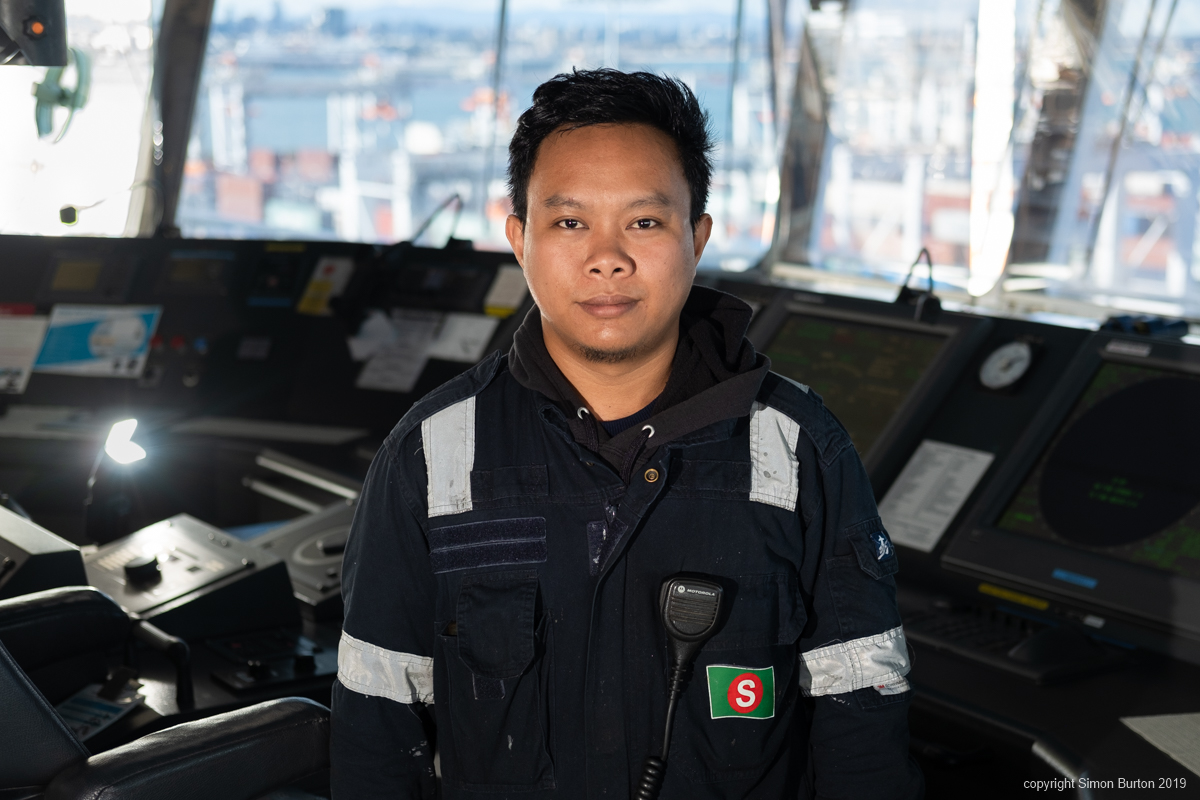 Krislen is a Third Officer currently working aboard the Bea Shultte, a 264-meter container ship operated by Bernhard Schulte Ship Management. She sails every six weeks from Singapore, then clockwise around Australia docking at capital cities loading and unloading containers.

Krislen had a carefree life as a boy. His parents were professionals – his father an army officer and mother a teacher. “My older brother, my younger sister and myself were well provided for. I was good at school and my secondary teachers wanted me to become a scholar. But clouds appeared and storm overtook our family. Circumstances resulting in my mother having to provide for the family by herself”.

Tertiary education in the Philippines is relatively expensive, unless you can qualify for a highly sort after scholarship. Krislen’s brother had already started university and as the family could not afford for two children to study, he had to wait.

Eventually Krislen enrolled at Mindanao State University in Manila and began his freshman year and, being good at maths, he intended to study accountancy. “Everything was going well until I went home to visit mum and my little sister and realised that they were not coping by themselves. I decided straight away that I had to quit uni and return home. But I was unsure about what to do next. Luckily my Aunt’s husband is a Seafarer and they suggested that I think about a career in the shipping industry”.

The University of Cebu, Maritime Education and Training Center offers Bachelor of Science in Marine Transportation. The three year course is – two years studying then a one-year cadetship on a vessel. Successful applicants receive scholarships with partnering shipping companies that pay for all the fees and costs. In return, these companies require their sponsored graduates sign on to work as officers for a further five years. Philippines maritime colleges are similar to military colleges. Cadets live in spartan barracks, follow a very disciplined regime, and their training is highly demanding.

“I felt that is was my last chance to get a good qualification, So I sat the entrance exam and despite lots of competition was accepted! It was a wake-up call for me as the discipline and training was really tough, but it gave me confidence that I could build a career. And my classmates became my brothers”.

Krislen graduated in 2015 and is now married and has two young daughters. “Thank God for the advent of mobile phones and video calls. Being able to see each other is making a huge difference despite only having internet access when we are in port”. Krislen is over halfway through a six-month contract. The Bea Shultte’s timetable is relentless. “Before I know it, I will have three months leave and be together with my family and have the chance to get to know my seven-month old daughter”.

“Melbourne is great! I have a Filipino friend who lives here. It is one of the few ports with a Flying Angels on-call bus service. It makes it possible to meet my friend at Seafarers Mission and go out for a meal nearby and still get back in time for watch duty”.

Krislen is optimistic about his life as a Seafarer. “Why not keep aiming high, you might just make it. Maybe I can be captain one day. But first, there is ongoing training programs to complete. And, as it always is with the Filipino Seafarers, competition is fierce”. Krislen remembers the first time he spoke to his mother after commencing maritime college – “Mother it is true, what they say. There are rainbows after the storms. She cried really hard”.

This article is also featured in ‘Seafarers of the Mission’ – an ongoing project featuring editorial and images by Simon Burton.

All Events are postponed due to COVID-19
Scroll to top