The Mission to Seafarers’ Maritime Art Prize & Exhibition is an international competition that has been hosted at the heritage-listed Mission building in Melbourne’s Docklands for nineteen years and is returning once again in 2021. The theme ‘Humanity and the Sea’ is even more relevant this year than most.

Last year more than 200 entries were received and 107 were shortlisted from a highly competitive field – including a greater number of emerging artists than previous years – all of whom responded to the theme ‘The Relationship of Humanity to the Sea’.  The jury were impressed with the high standard and diversity of entries, ranging from traditional to contemporary mixed media.

This year’s judges will be announced in due course.

The annual event is a major fundraising initiative of the Mission to Seafarers Victoria (MtSV). Australia relies on shipping and seafarers to connect to the world and to bring goods to our homes for the economy to thrive, and for the health of our island nation. MtSV provides welfare services to support the tireless work and hardships faced by those seafarers. The generosity of our sponsors who provide the prize money and other in-kind contributions, and the artists who pay an entrance fee and a commission on all works that are sold, ensures the continued success and wide popularity of the Maritime Art Prize & Exhibition and in turn, supports those seafarers. Due to the global pandemic, we are needed now more than ever.

The Mission to Seafarers building is an enchanting and iconic building in Melbourne’s Docklands. Open daily to the public, it is well worth a visit any time of the year, and particularly to see the Maritime Art Prize & Exhibition which is displayed throughout the public areas of the building, including the Norla Dome.

Rodney Forbes ‘A submariner dreams of home.’  Oil on Canvas

Rodney Forbes is fascinated by how people tell stories. His vibrant paintings address deeply poignant subject matter through dreamlike and surreal imagery. Figures and objects float against his trademark palette of bright, luminous colours, drawing the viewer in to explore a rich narrative. Drawing on both autobiographical and historical events, Forbes has the masterful ability to portray sometimes dark and challenging subject matter through vibrant, cartoon-like imagery, resulting in deeply engaging works that invite extended contemplation.

This year’s judging resulted in the main award going to an established artist, however it was far from clear cut due to the high standard of entries and their different approaches to the theme.  The winner, Rodney Forbes, first submitted for the Award in 2016 and his works have always demanded attention.  It was felt that his work not only captured the essence of the theme ‘The Relationship of Humanity to the Sea’ but was particularly pertinent that it was based on the lot of a submariner considering the whole of Melbourne is in lockdown with a pandemic, similarly without contact with loved ones.  Forbes is a master of irony and there are many layers embedded in this work, making it a worthy response to the theme. 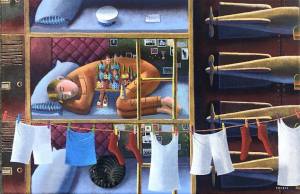 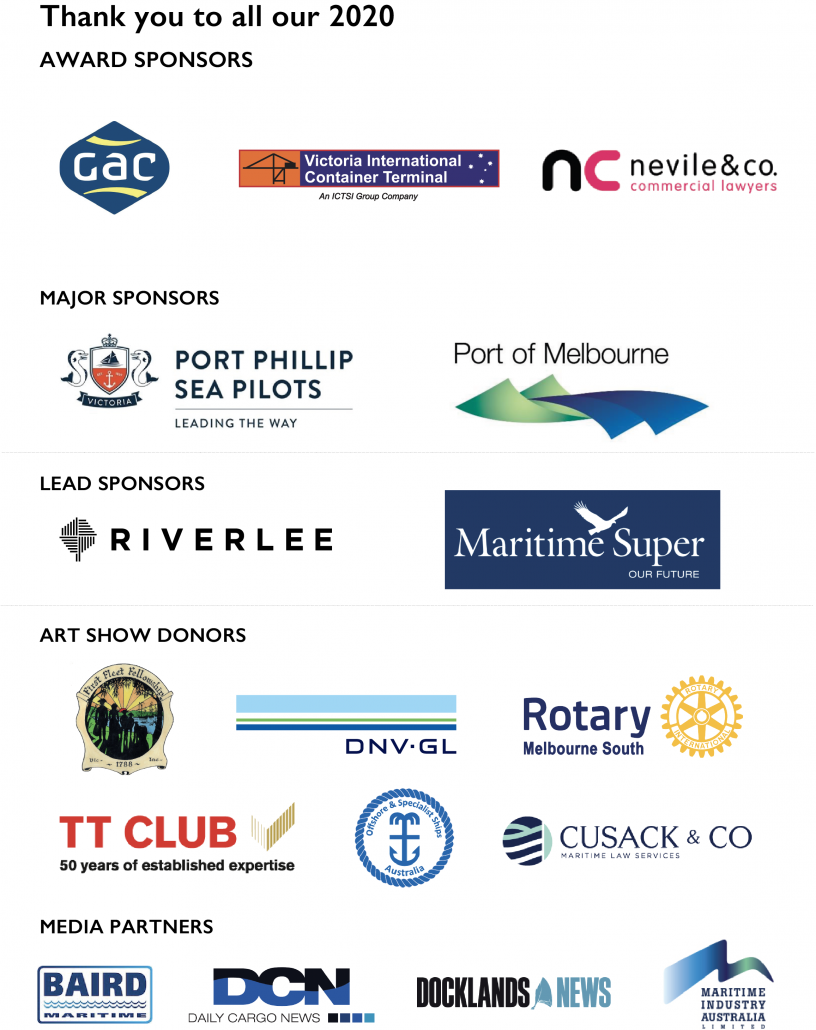 “A softly nuanced, big impact painting, with a restful colour palette and the calm of reflective waters.” 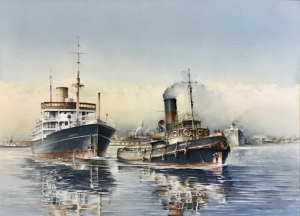 Benedict Sibley recently completed a Master of Contemporary Art in 2018 at VCA. Based in Melbourne, Sibley works mainly in charcoal and explores themes surrounding migration, the environment and inclusivity. 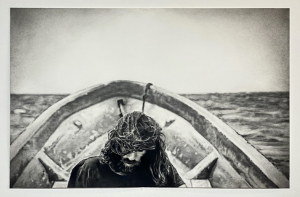 This work depicts a sculpture that is located by the sea in the coastal town of Burnie, Tasmania. It explores themes of identity through the connection the artist has with certain locations and how they make her feel. 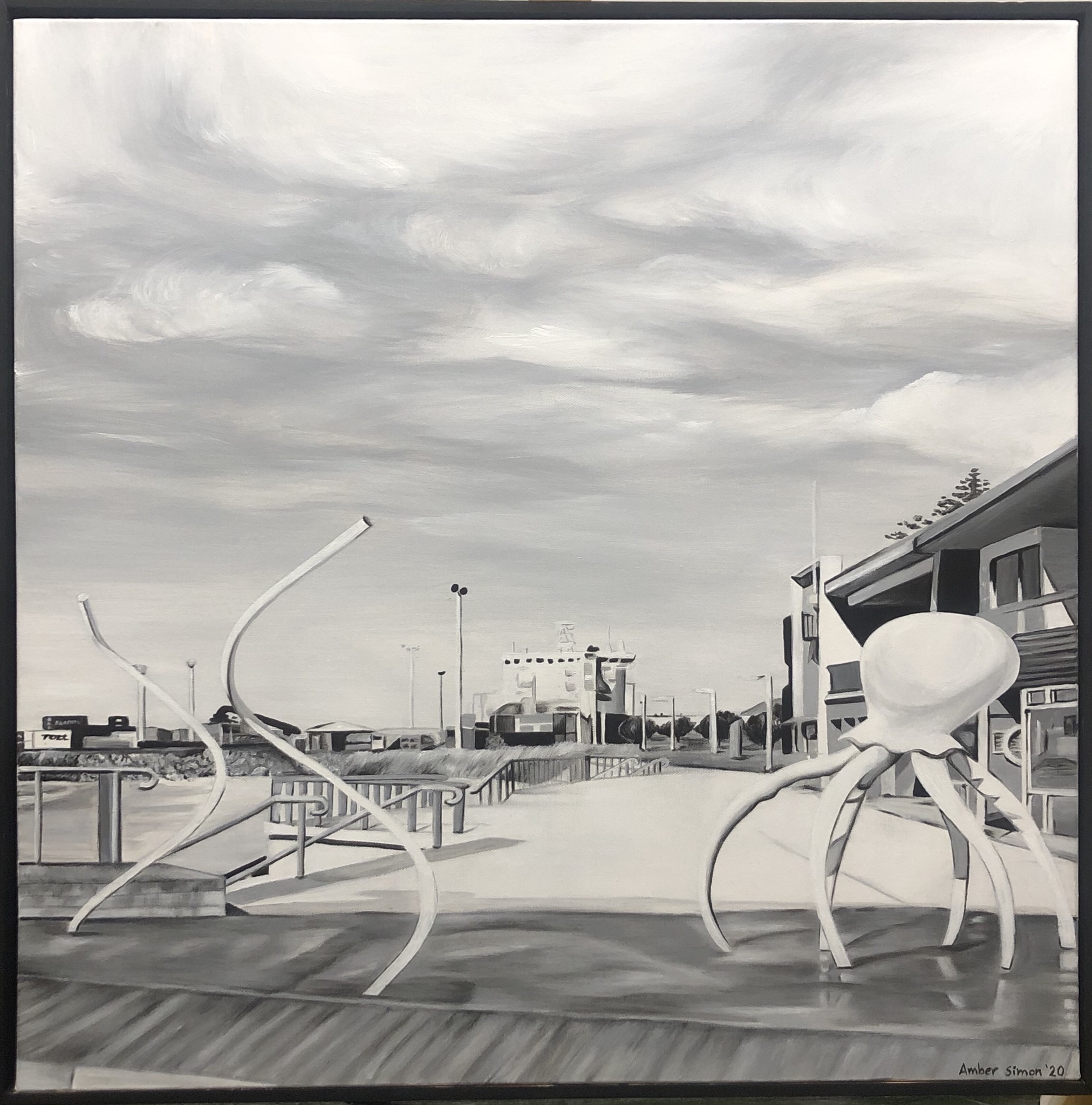 Equal placings went to highly skilled and beautifully rendered artworks reflecting contemporary themes of the self, and in living with plastics in our daily lives.

Mark Seabrook is a Melbourne-based painter and designer. His Art History degree informs much of his work, along with liberal doses of pop culture, absurdism and humour. 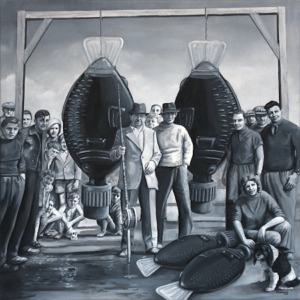 Orlando Durades Valdor ‘Get lost to find yourself’  Acrylic on Linen

Originally from Cuba, Melbourne based visual artist Orlando Durades Valdor has been honing his skills in geometric abstraction for the past twelve years, presenting a very unique and vibrant style. 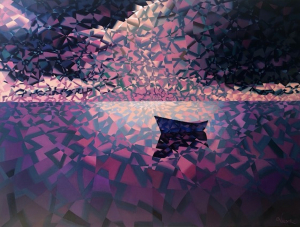